In the heart of the ancient kingdom of Magadha, and 15 km from the town of Gaya stands the peepul (or bodhi) tree under which, Prince Siddartha sat in meditation and achieved enlightenment at the age of 35, over 2500 years ago. This place is today known as Bodhgaya or Bodhigaya. In the ancient days it was known as Uruvilva or Uruvela.

When Prince Siddartha renounced his luxurious royal life and set forth to find out the meaning of life, he wondered as an ascetic in the forests surrounding his father’s kingdom of Kapilavastu for 6 years trying to figure out the meaning of life. He went from one yogi to another without much success. Upon reaching Bodhgaya he prepared a seat under a Bodhi tree using the Kusha grass and vowed not to rise from there until enlightenment was achieved. On the dawn of the full moon day of of the fifth lunar month he was able to achieve enlightenment, and thus became Gauthma the Buddha – The Enlightened One.

The historic place where he attained enlightenment is today recognised as one of the holiest places of pilgrimage in the world, where tens of thousands of Buddhists (and non-Buddhists) from many nations come here each year to pay homage to him and his teachings, meditate and purify their minds. Buddhists believe that it is a meritorious act to visit this place at least once in their lifetime. In 2002, UNESCO declared the temple complex at Bodhgaya as a World Heritage Site. 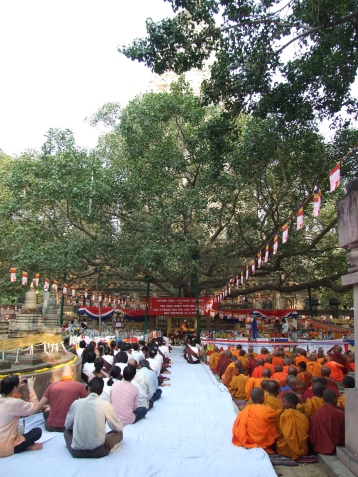 The Bodhi tree you see today in Bodhgaya is believed to be the third generation of the original tree under which Prince Siddartha sat to meditate. A branch of the original tree was sent to Sri Lanka during Emperor Ashoka’s time through his daughter Sangamittha. Later, according to historic legend a jealous wife of the emperor has cut off the tree because he was paying more attention to the tree. When the off shoot of it died a few centuries later, a from Sri Lanka has been bought and planted here.

Adjoining the Bodhi tree is the Mahabodhi Temple, which is sometimes called Sambodhi or Maha Bodhi or Bodhi Mandapa. The history of this imposing architectural masterpioece is shrouded in obscurity. However, this temple is considered as one of the earliest temple constructions in India and its architecture has influenced temple construction over the centuries, not only in India but other parts of Asia as well. This is also one of the earliest Buddhist temples built entirely in brick, still standing in India. 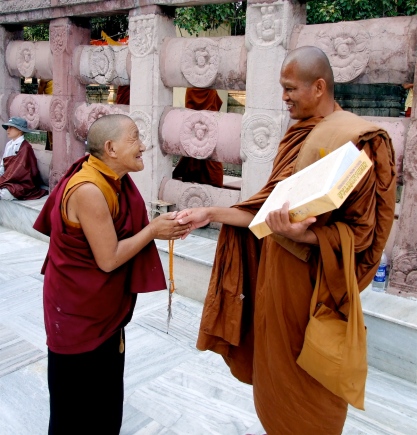 Some scholars argue that the current temple was built in the 2nd century AD while others say it was in 5th century AD. Renowned Chinese traveller and pilgrim Fa-hien who visited Bodhgaya in 409 AD mentions only three monasteries and did not describe the Mahabodhi shrine. But, another renowned Chinese pilgrim Hiuen Tsang who visited here in 637 AD describes the shrine as about 49 to 52 metre high, a description which tallies closely with the current building.

If one visits Bodhgaya at the peak of the Buddhist pilgrim season between September to January, you can sample the rich diversity of the Buddhist worship rituals from across the world. The Tibetian pilgrims circling the Mahabodhi shrine by taking two or three steps, then fully prostrating themselves as they recite sacred mantras, the Sri Lankans led by a yellow robe monk and followed by white-clad devotees reciting aloud their Buddhist pilgrim hyms in Sinhalese as they encircle the shrine three times, so are the Thais led by monks chanting the Pali suthras, you would find Korean pilgrims in their grey robes accompanied by a drum-beating monk in brownish robes and citing Korean Buddhist hyms. 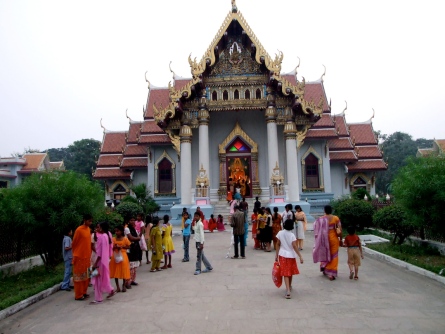 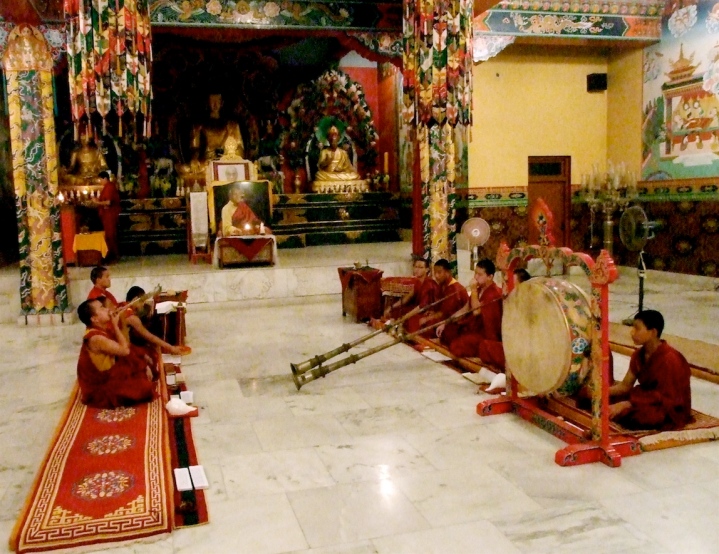 The Bihar state government has been encouraging foreign Buddhist nations to build temples and other facilities in the area, hoping to increase tourist revenues. In 2007, Bihar Cabinet approved a 25 year master plan to “give an international look” to Bodhgaya. Thus, the Mahabodhi complex is surrounded by various temples and monasteries which reflects the diversity of Buddhist temple architecture and traditions across Asia.