The Erawan Shrine – officially known as Thao Maha Brahma – is a shrine to the Hindu God of Creation Brahma, but to most Thai Buddhists, this four-headed god (deity) is also a Buddhist deity. The popular shrine is always crowded with worshipers from Thailand and abroad. 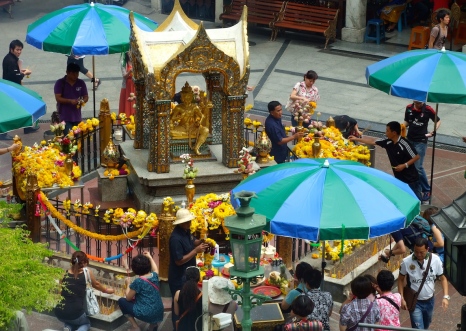 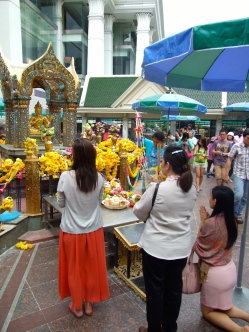 Situated in the commercial center of Bangkok, this shrine was built in 1955 after the nearby Erawan Hotel was completed. When the hotel did not do as well as expected, an astrologer Rear Admiral Luang Suwichanphaet told the hotel owners that the hotel’s foundation stone was laid at an inauspicious time and to correct that mistake, a shrine must be built for Thao Maha Brahma along with a spirit house. The sculptured image of Brahma is always covered with gold leaf offered from worshippers.

These Brahmin-Hindu influences which came to Thailand – or Siam – were not always directly imported from India, it also came via the Khmers. Such influences became stronger during the Ayuthaya period in the 14th century, and some elements of these are seen in Bangkok today, such as this shrine and many other such shrines dedicated to Hindu gods such as Ganesh and Indra. They are all considered as Buddhist deities by the Thais. 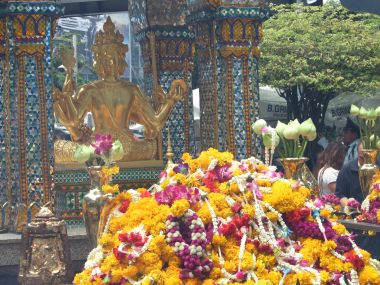 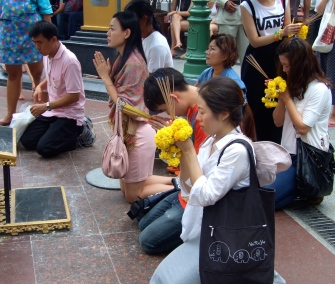 As Nepali born Thai monk Venerable Dr Anil Sakya, the Supreme Patriarch’s Assistant Secretary told me during an interview I shot for the TV documentary ‘Path of the Dhamma’[1] in 2008, there is nothing wrong according to Buddhist teachings to adopt Hindu deities (gods): “Bhramanism and Buddhism can go together especially for people in normal life (who) always live in insecure life they will not know what will happen tomorrow so to get some feeling of safety and feeling of confidence they might have to depend on this almighty power of different gods (and) although Buddhism denies that sort of thing. If you believe in that type of thing and it encourages you to do some good things Buddhism would say okay that is your choice”

It is this Buddhist attitude that has made this four-faced image of Brahma a very popular shrine in the commercial centre of Bangkok. When the Thais come to worship here they usually follow a procedure like buying garlands of flowers normally in bright yellow colour symbolising gold to bring luck to their life and also light incense sticks. Many also pay for Thai classical dancers to perform on their behalf as a offering to God Brahma (see pictures below). 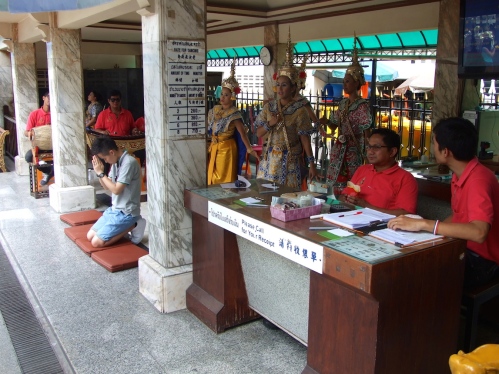 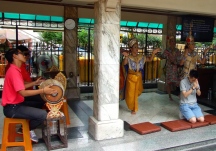 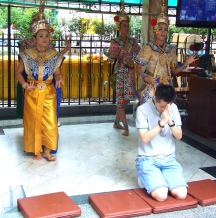 In August 2015 Thais were shocked when this place was bombed by a suspected Islamic terrorist supposedly targetting worshippers from China, who come in large numbers to workship here. The statue of God Brahma was slightly damaged but within two days it was repaired and everything came back to normal.