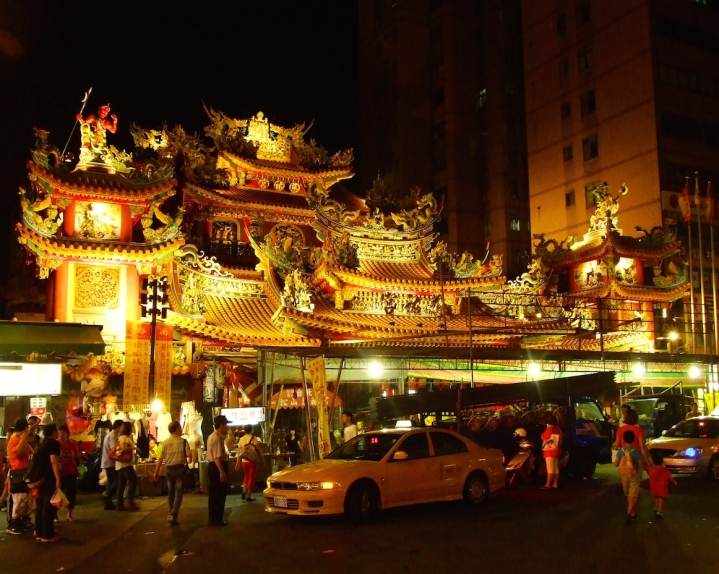 With over 70 percent of the population expressing belief in either Buddhism or Taoism, it is Taiwan that is now in the forefront of the revival of Chinese culture and they are in fact sharing their preserved heritage with mainland Chinese today. Taiwan’s strong roots in traditional Chinese religion is reflected in the many colourful temples you see everywhere in Taipei – be it small shrines for various deities or large temples decked with rich Chinese temple architecture.

Taiwanese popular religion today is mainly amalgamation of the great religions of Buddhism, Confucianism and Taoism, blended with beliefs in deities, ancestral worship and philosophical teachings of Buddhism and Confucianism. In the temples, be it Buddhist or Taoist, these elements are reflected in the altars, architecture and drawings, as well as the devotional practices of the population.

One of the most popular and oldest temples in Taipei is Longshan Temple, which was built in 1738 by settlers from Fujian as a gathering place for Chinese settlers. Located in the old village part of Taipei’s Wanhua District, this temple has stood the test of time and lasted through several natural disasters and wars. It was leveled by an earthquake in 1815, damaged by a typhoon in 1857, and badly damaged by American bombers during the Japanese occupation in 1945. 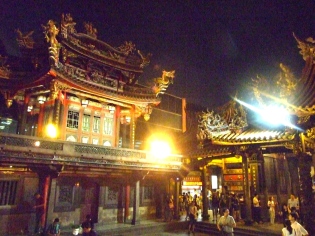 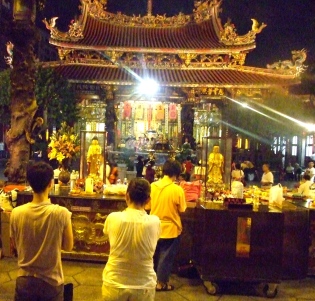 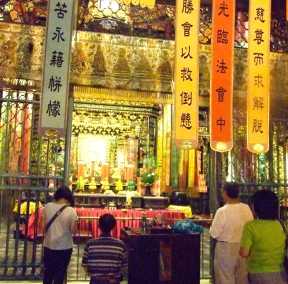 Located next to Wanhua station it is easy to reach and is generally crowded by worshippers especially in the evenings. The temple, which has been repaired and reconstructed at numerous times can still boast of having preserved its traditional architecture and is famous for its lively stone sculptures, wood carvings and bronze work. The temple columns, inscriptions and plagues are also worth a look. The temple has 3 halls separated by a courtyard in the middle where you will see devotees mingling around with families lighting joss sticks, praying and chanting. The main hall is dedicated to the worship of deity Guanyin, the Buddhist goddess of mercy and the rear hall is dedicated to popular Taoist deity Mazu, who is the heavenly mother and protector of seafarers – many of the Fujian migrants were fishermen and mariners.

A very popular temple by the side of the Jaoho night market in Songshan district is Sung Shan Tzu Yu temple, which was built between 1753 and 1757. The main deity worshipped at this temple is called Ma Tsu and on her birthday on 23rd March there is a grand 3-day festival taking part here including a parade around 13 streets in the vicinity. Praying for prosperity on Chinese New Year eve is another popular festival where the temple closes its doors at 11.30 pm and open at midnight when a big rush takes place where devotees come to light lanterns at the dawn of the New Year for good luck.

In 2016, Bank Sinopac installed ATM machines at the temple for devotees to pay for the lanterns electronically and also to assist the temple by not having to collect and take large piles of notes to the bank for deposit. The large donations they receive have also been put into social welfare work in the area.

There are two temples that are next to each other but with sharp contrasts in their architecture and landscaping and their roles. These are Confucius Temple and Baoan Temple. The former is dedicated to knowledge and its landscaping reflects certain aspects of the Confucuis philosophy, while the other is a colourful temple dedicated to worship of deities in the Taoist religion.

Confucius is a great Chinese philosopher who lived between 551-479 BCE and wrote down every bit of knowledge he passed on to some 3000 students. After his death they were compiled into a book and known as ‘The Analects of Confucius’ and ever since Han Dynasty emperor Wu adopted these writings as state philosophy, China effectively became a Confucius civilization. As best-selling Chinese author Yu Dan put it: “The reason why these simple truths have survived down the millennia is that it has helped generation after generation of Chinese to stay grounded, to understand the nation and the culture that formed them, and not to loose their heads, even when confronted by immense social change and almost overwhelming choice”.

Thus the Confucius Temple is a tribute to that spirit and an institution to help continue that tradition. There is not much worshipping done at this temple – in fact none at all in the traditional sense – but it has a wealth of knowledge in its exhibition halls if you have the patience to go through it – which is given in both Chinese and English. You can gain knowledge of the meaning of archery – why it is an art of cultivation of heart and mind through boldness and concentration; Chinese mathematics – showing how the Phythogorian theories are Chinese in origin – and how triangulations were used during the Zhou Dynastey to determine boundaries and construct buildings. Old Chinese maths books are also shown. 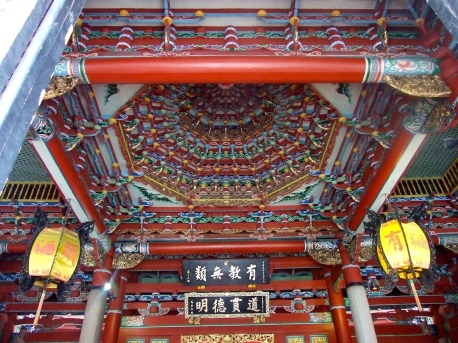 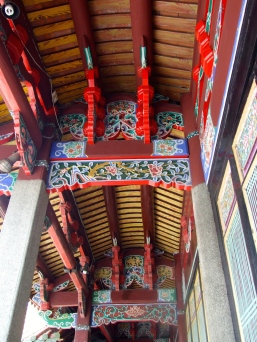 Confucius loved simplicity and the temple reflects this simplicity. The architecture used in building the gates and roofs also reflect Confucius thinking in building and harmony such as double-eave roofs taking the rising sun in the middle. The half-moon pond and pan bridge in the courtyard symbolize a Confucius graduation ritual, where the students enters the temple plucking a celery from the pond, and the bridge is protected by bamboo raillings and decorated brush-tips as symbols of integrity and flourishing scholarship. 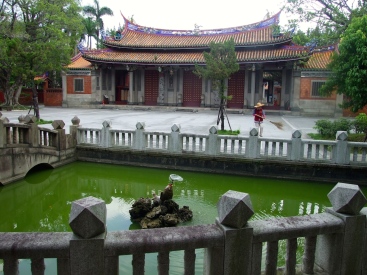 Across the street from Confucius Temple is Baoan Temple, which is not as quiet. Built in stages between 1805 and 1830, this temple has been closely associated with the development of the Dalongdong community – which has been a commercial hub of the city. The shops, which line the surrounding streets, are believed to have been built originally from left-over material from the construction of the temple. This colourful temple has dragon carvings everywhere in its columns as well as the roof. The main deity of this temple is Baosheng Dadi, the god of medicine. A 10th century emperor he is believed to have done medical miracles such as putting eye drops to a dragon’s eye and removing foreign objects from a tiger’s throat. During his lifetime because he cured many serious diseases, he is revered as the god of medicine. 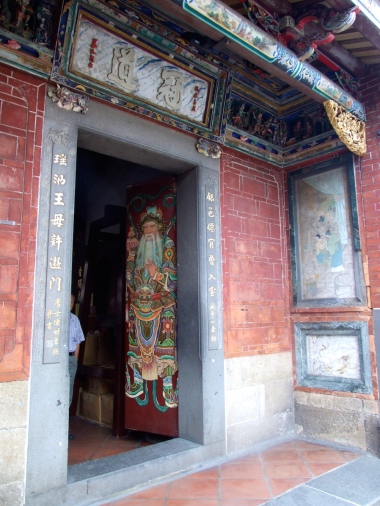 Baoan Temple’s architectural style also reflects early settlers’ ancestral backgrounds. For instance, the rooftop adopts the traditional Sanchuan (triple gate) wooden structure; the roof ridge belongs to the southern Fujian style; the floor and wall surface are covered with wide, thin red bricks and tiles. The dragon columns in the main room of Sanchuan Dian and the side room of the Main Hall were first built in 1804 and 1805; these are the oldest stone-carved works at Baoan Temple. The dragons are carved out of the octagon columns. The four-footed dragon has two front feet treading the water and two rear feet grabbing the cloud; it is quite a tremendous scene ( see picture below).[1]. 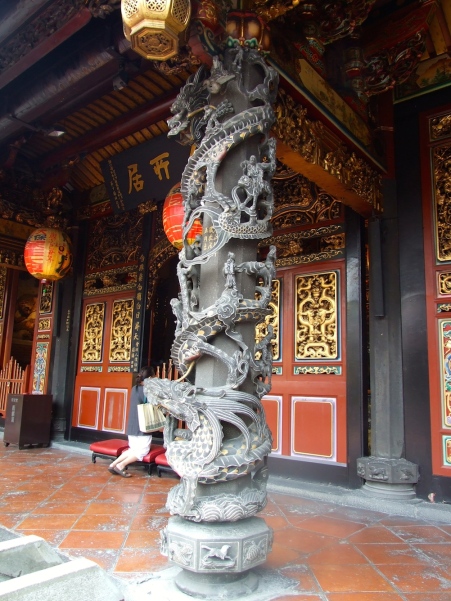 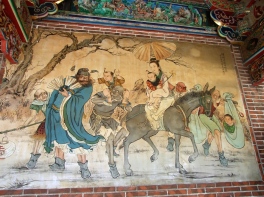 What is described here are only 4 of the main temples in Taipei, the city is full of such temples, though smaller in scale these temples are in street corners or hidden inside narrow streets or adjoining markets and so forth. The Wen Chang Ci temple (see picture below) is one of them hidden in a small street within the Dalongdong community. “Ci” indicates a place where people come to study and pray for good results.

These are not monuments to a bygone era, but functioning temples where people worship every day and hold colourful festivals at regular intervals during the year. The fact that young people are as active as their older generation is a good example to other East Asians countries where young people tend to shun their traditional belief systems in the name of modernity. Taipei’s temples are living examples of how modernity and tradition can mingle together in harmony. 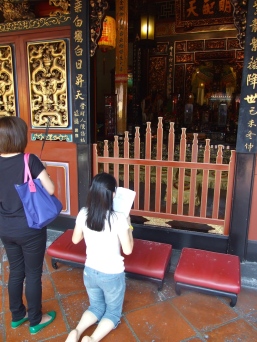