Vesak is the most important religious festival for Sri Lankan Buddhists, which falls on the full moon day of the fifth lunar month in May. It marks the triple anniversary of Gauthama Buddha’s birth, enlightenment and death. Every year over a period of three days Buddhists all over the country celebrate this festival in a grand scale with colourful lanterns and pandols lit up at night paying homage to the Buddha. Thousands of people commute around cities and towns across the country to see these sights until early hours of the morning.

Vesak also marks the beginning of a new year in the Buddhist calendar. The Buddhists era (calendar) starts at the point of the Buddha’s death, which took place 80 years after his birth.

Sri Lankan Buddhists perform two kinds of activities during Vesak – spiritual and cultural. Most of the spiritual activities are done in temples on the full moon day when devotees dressed in white observe the 8 precepts for the day, or take part in giving food to the monks and those taking the 8 precepts, as well as participating in various pujas (rituals).

All governmental and commercial establishments remain closed for two days to allow Buddhists to take part in the activities, with generally the first day – the full moon day – set aside for spiritual activities while the second day is mainly for cultural activities.

However, on both days and also spilling into the third night as well, people decorate their houses with Buddhist flags, lanterns, lamps and colourful electric lights. They erect large pandols in streets and market squares with elaborate light-effects at night, also some make large lanterns, that has become a very sophisticated art by itself. These attract thousands of revelers at night who drive around the cities and towns in cars, vans, trucks, buses and even trailers attached to tractors to enjoy the colourful scenes.

They are often fed for free with ‘dansalas” where businesses and rich individuals offer free soft drinks and dinners for sightseers. There are also puppet shows, traditional dramas with Buddhist themes, singing of Bhakthi Gee (devotional songs) and other entertainment offered for free in street corners. 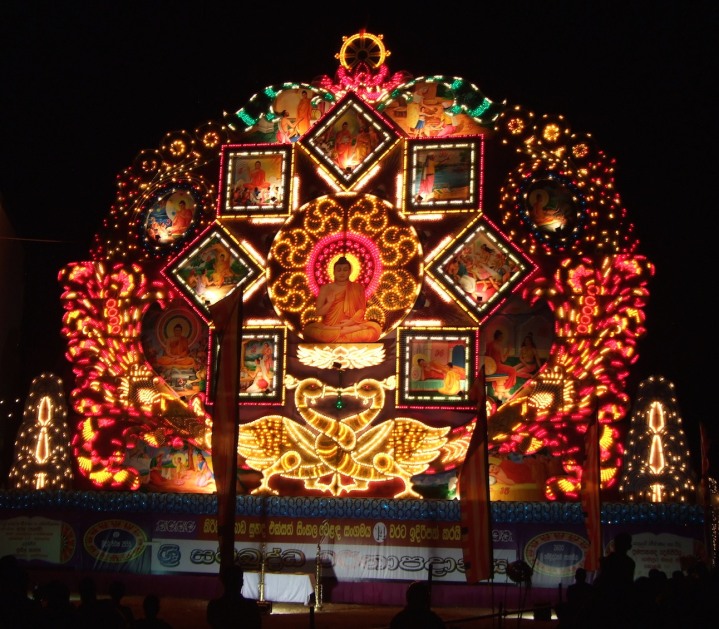 All in all the 3-day Vesak festival in Sri Lanka should rank as one of the most colourful religious festivals anywhere in the world. Certainly it is unique to the Buddhist world.