Sanchi located about 45 km from the north-central Indian city of Bhopal is not directly related with the life of Gauthama Buddha, but it is a popular Buddhist pilgrim site that attracts over 100,000 visitors a year. The reason is that it hosts one of the most well-preserved Buddhist stupas in India whose history goes back to the 3rd century BCE.

Built on top of a 90 metre hilltop with great views of the scenic countryside of green wheat and yellow mustard fields, the monuments provides a good insight into ancient Buddhist arts and architecture. The four stone-carved gateways of the stupas, which have been marvelously preserved, resemble some of the finest examples of Buddhist arts that attracts both Buddhist and non-Buddhist visitors to the site. 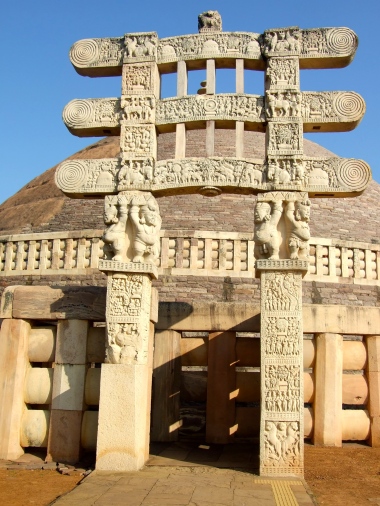 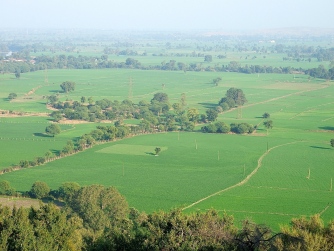 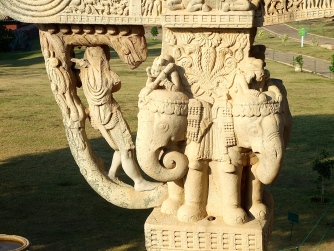 The gateways give a good account of the rise (and decay) of Buddhist arts over a period of 13 centuries beginning from 3rd century BCE to 12th century CE. Since Sanchi is not associated with the life of the Buddha it is not usually mentioned in Buddhist scriptures or accounts of Buddhist pilgrims in ancient times. But Sri Lankan chronicles Mahavamsa and Dipavamsa have mentioned it. These have mentioned that the great Indian Buddhist emperor Asoka in 3rd century BCE, before he became the Maurya emperor, had married the daughter named Devi of a merchant in Vidisha (nearby ancient city) who has later built a monastery at Sanchi. Emperor Asoka has subsequently built the stupas and erected a “Asoka Pillar” that is still there.

Archeologists say that inscriptions at Sanchi shows that a great Buddhist stupa and monasteries were built here due to the patronage of rich merchants of Vidisha, that helped Sanchi to flourish long after the Maurya empire declined following Emperor Asoka’s death. Between 14th to the 19th century CE Sanchi was deserted and remained unnoticed. The decline was due to aggressive Bhraministic revival in these parts of India beginning around the 13th century CE.

Excavations undertaken by the Archeological Survey of India (ASI) since 1993 have exposed a number of buried structures that indicate a large complex of temples and monasteries.

The largest stupa is a circular dome (anda) of 36 metres in diameter and 16 metres in height crowned at the top with a triple-umbrella made in stone. These stupas were originally meant to be depositories of ashes of the dead. It also has a paved processional path around it at a level that includes a plight of stone steps of about 4 metres high. This may have been for walking meditation or ceremonial processions around the stupa.

The four gateways are the main attractions of Sanchi that dates to 1st century CE. Each gateway consists of two square pillars crowned by a set of 4 lions, elephants or pot-bellied dwarfs supporting 3 horizontal columns and two vertical columns, all carved in stone depicting Jataka stories (Buddha’s previous lives of compassion and generosity), life of the Buddha or the natural environment. Crown of the top horizontal column is a “dharma-chakra” that symbolize the “tri-ratna” the three pillars of Buddhism – Buddha, Dhamma and Sangha.

In the carvings depicting the Buddha’s life nowhere is he represented in human form. Buddha is represented as symbols such as a horse without a rider but an umbrella held above; a dharma-chakra; a throne; pillar or footprints. Even the “parinirvana” (death) of the Buddha in Kushinara between two sal trees is depicted by a stupa.

Sanchi is not a functioning Buddhst temple as such. But the Mahabodhi Society of Sri Lanka has built an adjoining temple for worship by pilgrims. The area has no Buddhist community.

The Sanchi village is interesting by itself to take a stroll through the narrow streets with its multi-coloured houses and small huts with clay walls. Some households also raise cows and goats. They have a number of local schools with each having its own uniform. There are a number of small Hindu temples as well as a functioning Jain temple. There is a community of about 10 Jain families.

The Madhya Pradesh state government is keen to develop Sanchi into a major tourist attraction and they have recently opened a family-oriented resort there. The only other accommodation in Sanchi is the Mahabodhi Society of Sri Lanka’s international guest house which is usually booked out by Sri Lankan pilgrims during the October-November and March-April period. The state government has also recently opened a new university just 10 km from the stupa – known as the Sanchi University of Indic Buddhist Studies – it aims to develop educational programs and intellectual exchanges with Buddhist countries across Asia.

The best way to get to Sanchi is via Bhopal, which has a domestic airport and is a very busy intersection for express trains crisscrossing India. There are regular busses from Bhopal to Sanchi that takes about 1 hour and also a few local trains that stop at Sanchi. It is also possible to hire a taxi from Bhopal to Sanchi and vice-versa.